Lessons From #INBOUND15: A Psychologist’s Feedback and What HubSpot Can Do About It. 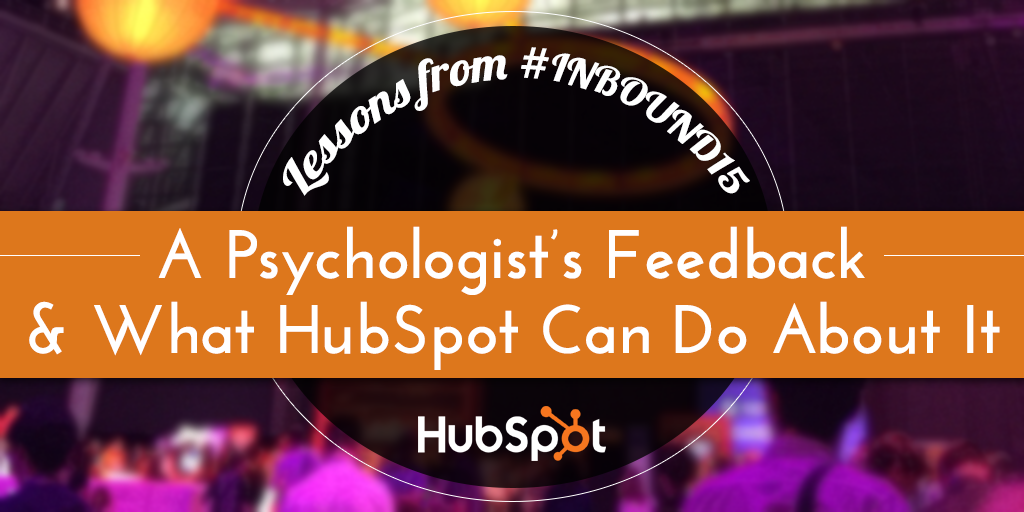 The story of how I became interested in Inbound Marketing is the unlikeliest story of all. A mere three years ago, I was working solely on building my private practice as a Clinical Psychologist. Then, as luck would have it, I met Gabriel Marguglio, the owner of Nextiny Marketing. The official reason for our meeting was that a mutual friend suggested that I needed a website to help my new business to grow. I decided to meet with him to find out more about websites and marketing “in case I needed it in the future.”

Related Blog: Lessons From #INBOUND15: How to Get the Most Out of Your Inbound Experience

Several things came out of our first meeting. First of all, I did get a website as well as marketing tips and a social media presence and I found out that inbound marketing works! Second, Gabriel and I began dating and got married despite the proclamation after my divorce that I would never, ever get married ever again. As we blended our lives together, I found that, thanks to my Psychology background, I had much to contribute to the agency’s growth. As Gabriel and I researched HubSpot together, we came to the conclusion that embracing inbound marketing was a logical choice for Nextiny Marketing.

This year after becoming Gold Partners, we decided to attend #Inbound15 and to bring Nextiny’s Director of Operations and Sales expert with us as well. Below are some of my observations on #Inbound15 and suggestions for HubSpot and attendees.

I loved most of the presentations that I attended. There was just one workshop that I found incredibly boring and obsolete, but hey, I got up and left early and got to actually chew my lunch. Although I did receive a follow up email with a survey link asking for my input on what I liked and didn’t like about #Inbound15, I would like HubSpot to create a more straightforward and immediate way for attendees to rate the workshops. For example, the link could be sent before the conference and the ratings could occur more immediately. Furthermore, I suggest that the folks at HubSpot analyze the most popular themes for workshops and to make sure that they offer two alternative times for those specific topics next year.

Other attendees complained about not being able to get into the specific workshop that they wanted to attend. What I would suggest to future attendees is to do what we did: take the time to make a list of alternative workshops as a backup in case your number one choice is not available and change your course of action the second that you get wind that you may not be able to fit into the workshop of you choice. We did this and it worked. Also, you might want to keep your eye on the big picture, make the best of the situation and enjoy the conference as much as possible since having a conniption over a missed workshop defeats the purpose of your attendance at this event and doesn’t ultimately change the outcome.

I found that the lunch vouchers, appetizers, drinks and coffee offered were mostly good enough. In fact, I think that HubSpot did a great job considering that they had to cater to 14,000 people. The only thing that I suggest be changed for next year is to offer bagels with cream cheese or jam every morning instead of granola bars. Bagels make people happy and having to skip breakfast in order to get to the Convention Center early in the morning does not. To some extent, I had to be responsible for my own comfort by wearing great shoes, bringing a refillable water bottle, bringing warm clothes and bringing my own snacks. This made a world of difference since I walked much more than I ever expected, had no time at all to even get water or snacks as I hurried to make it in time to the next workshop and I found myself shivering from the ac during keynote speakers. Next year I plan to skip bringing my laptop and take notes on my iPad instead, as it gets heavy to carry.

I was a bit confused about the socio-political element of #Inbound15 and I’m a clinical psychologist who usually loves such discussions. While I really enjoyed that most topics that I personally attended had to do with business, marketing and sales, I was taken aback by some of the presentations offered which clearly had nothing to do with marketing/sales but which focused on social and political issues instead. I understand why some people felt cheated by this and suggest that it be avoided next year. I suggest that HubSpot remove socio-political speakers who are controversial and distracting to many folks.

As a partner agency, I would like more network opportunities with other partners, especially those in my geographical area. I know that Partner Day is the day to do this, but it would be wonderful if HubSpot provided more times for partners to get to know each other. During his workshop “Scale to Win,” Karl Sakas provided such an opportunity by having us introduce ourselves to other partners based on whether our agency was in a High Growth or High Lifestyle category. This led us to meet folks from another agency in Florida, which frankly delighted us. Incidentally, Mr. Sakas’ workshop was top-notch and he gave concrete ways to grow as an agency that are not reactive but strategic.

If you are the head of a Partner Agency, try to budget the ability to bring some of your key staff to #Inbound15 with you. Not only does including your staff result in increasing your chances of buy-in of the Inbound philosophy as well as stoking the flames of passion for a shared marketing vision for your agency, but it allows key people, such as sales experts, to learn tricks of the trade.

We absolutely loved interacting personally with the HubSpot staff who have supported us passionately and patiently through Nextiny’s growth process. I found this to be one of the most enjoyable parts of attending #Inbound15. Is there anything better than being able to say thank you to the folks who have allowed our agency to grow to the point where we are at and who will continue to support our vision for the future? And we got to do it while learning new things, eating good food, listening to great music and overall having a blast!

7. Prioritize what to do next:

Finally, as Gabriel and I got together for a break on the last day of the conference, I was struck by our overwhelming feelings at the number of the changes “necessary” to get our agency working better. As a partner, when you hear over and over about ways to do this and this more efficiently, you will inevitably begin to feel as if you need to improve everything about your agency. Gabriel and I had to remind ourselves, especially on the last day when we were exhausted, hungry, and our feet hurt, of everything that we have accomplished in just a year. We also realized it was necessary to compartmentalize the amount of information learned by making a list of three immediate priorities for the agency to accomplish in the next six months and three things we need to do in the coming year, based on what we had learned. We also reminded each other that we had heard from partners whom we respect and whose level we aspire to reach, that they too have things that they need to change and that this will always be the case in the fast-paced, fast-changing world of inbound marketing.

5 Key Videos You Need to Make For Your Business 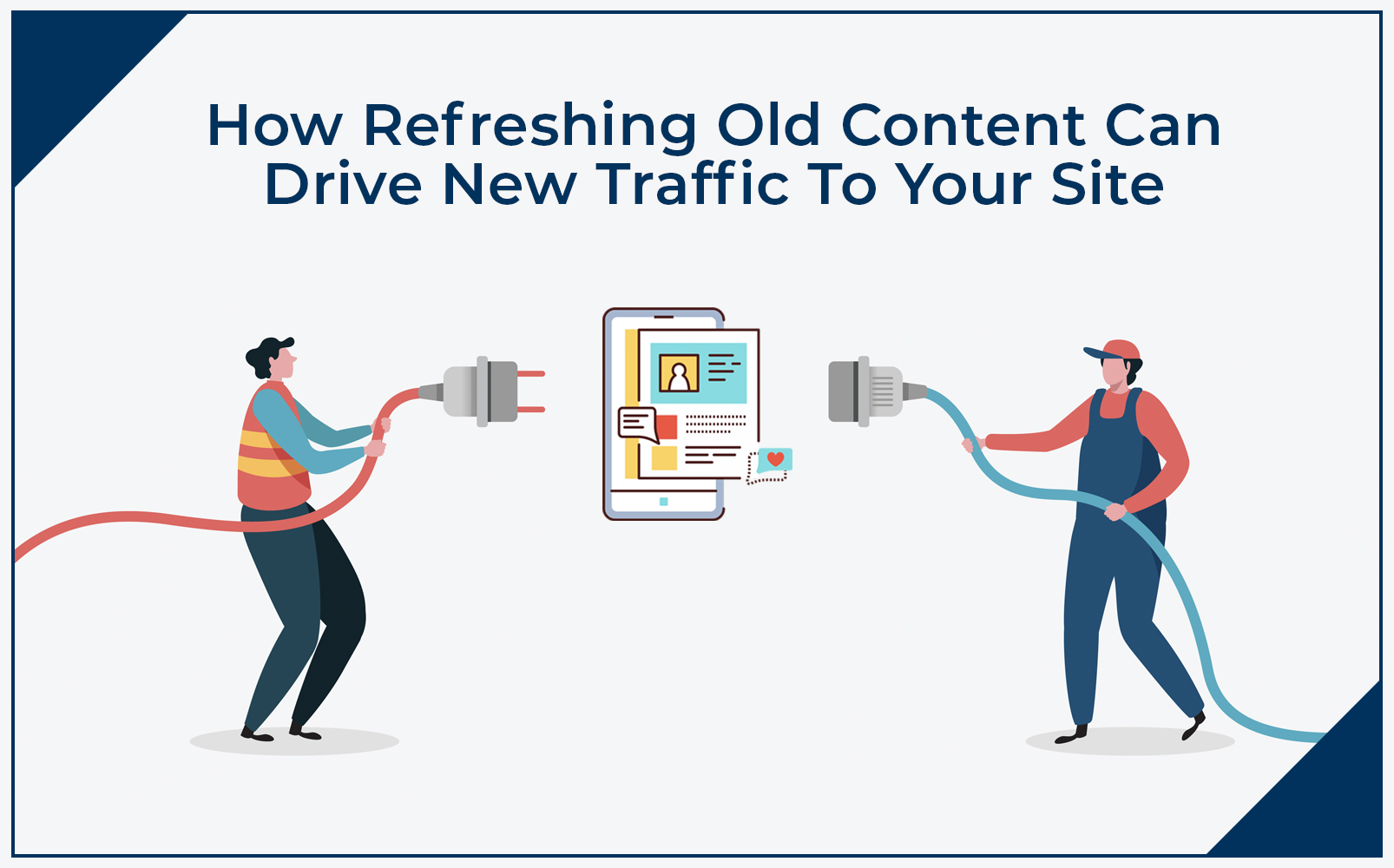 How Refreshing Old Content Can Drive New Traffic To Your Site